We are fighting against COVID-19

We have taken extra precautions to keep our clients and staff safe and healthy. Our home care services are especially critical right now. Our staff’s extensive training in infection control allows us to safely come to our clients' homes and assist them with their current medical needs. Read our full statement here. 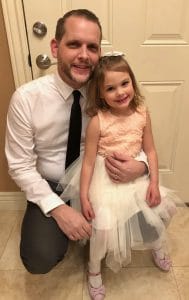 Tim Floyd joined our team in 2016 and is currently our Director of Business Development. Tim was kind enough to talk with us about what his time as part of the Haven family has been like.

I started with Haven back in 2016. We were in an office location near the King Cash Saver just down the road here in Ozark. It was a much smaller space and we were all kind of just squeezed in together. In the beginning I shared an office with John Ray for quite some time. It was not uncommon at all for John to have to leave the office in a hurry, as he was still actively involved with some direct patient care. It was during this time period that between our comings and goings I got to spend time with John and got to know him and really learn about the business.

What drew you to Haven?

I had met John through the company I was previously working for as a DME vendor. I immediately liked John because he seemed to have a different style and approach about him. There seemed to be a warmth about him that made you feel like he was really trying to do something different. I was then able to meet Bethany, and Susan, and started interacting with a few of the other staff on a more regular basis and just felt a connection. After 10 years at my previous company I made the decision to take the leap and come to Haven.

What has made you stay with Haven?

I think that your work life is a lot like a marriage. Both parties have to be invested, committed, and willing to ride the waves of the good times and the bad times. It takes a lot of faith and trust on both sides. I have always believed in the idea of a company that can thrive in any space or market, by just following a good moral compass and doing the right things. And I think at its heart, Haven is that company

What has been the biggest change over your time here?

There has been a lot. I would say the biggest change would be the change of direction and focus when it comes to our service lines. We used to offer more variety of services for the first couple of years I was here. It was a double edged sword having a wider variety of services to offer, but it was a lot to juggle being a smaller company with limited resources

What is your favorite memory of working at Haven?

Ironically I would say my favorite memory is actually one of my worst memories. Someone had the great  idea that we would form a Haven softball team. I (against my own better judgement) joined this team. It was hot, it caused me to have pain in muscles that had gone dormant for nearly a decade or better, the other teams would run all over us…. man we were losers….but it was a lot of fun! I really don’t know what we were thinking….

Haven Healthcare offers clinical excellence at every step of your healthcare journey. Our wide range of services — which includes home health care, hospice care, and caregiver services — provides patients and their loved ones with convenient and compassionate treatment and support.